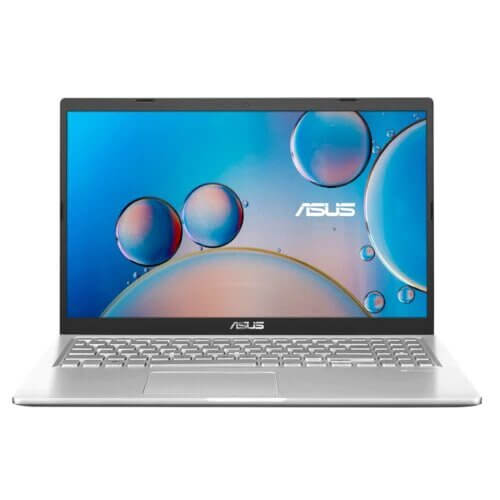 Asus ROG Strix G15 G513 on an AMD processor combines very good performance and an attractive, elegant design. The ROG series from the Taiwanese manufacturer is a series specially designed for gamers, with solutions to achieve better performance. The cooling system is also unusual for ordinary laptops. This series has a very aggressive, distinctive design, but the Asus ROG Strix G15 G513 is more subdued in this respect, making it more elegant.

An elegant laptop with a gaming character

The entire laptop is made of high-quality plastic, which fortunately does not have any expressive gaming inserts through which you could easily guess the purpose of the device. The color scheme is kept in a shade of dark, metallic grey.

The upper cover is divided by a diagonal line into a smooth and rough part. On the smooth surface, the manufacturer placed a neat logo of the ROG series.

After opening the top flap, the eye is attracted by a very nice backlight running from left to right from light blue to dark purple. However, the color transitions can be freely edited. I like this solution very much. The working panel itself, like the cover, is separated by a diagonal line that divides the housing into 2 parts that differ in shades of black. This treatment makes the appearance of the laptop not monotonous and gives it the right gaming character mixed with elegance. An additional element emphasizing this effect are the diodes mounted in the lower part of the base. They direct the light to the tabletop on which the equipment is lying, which gives a nice effect.

It is surprising that we will not find a numeric keypad on this laptop (usually in 15.6-inch models it is separated on the right side). It has been moved and integrated with the touchpad. It is displayed on the trackpad, after pressing the appropriate button, through red LEDs. This created the possibility of extending the keyboard to the width of the entire housing, which ensured a better arrangement of the keys. Their arrangement is also satisfactory. It is very easy to get used to typing on it, and the travel of the key is clear, and the release is sure and expressive.

At the heart of the Asus ROG Strix G15 G513 is the Ryzen™ 7 5800H. It is a powerful eight-core and sixteen-thread unit with a base clock speed of 3.2 GHz. In Turbo mode, the maximum clock frequency will be 4.4 GHz. This IC is more than 30% more efficient than its predecessor. It is a serious competitor to Intel and is more efficient than its direct rivals. It’s perfect for multitasking and can easily handle most new games at high details. A graphics card from Nvidia GeForce RTX ™ 3060 was inserted inside. It is a very powerful graphics card. Below is a table of fps achieved by this card in various games.

As you can see, the card has a very decent performance. The whole is complemented by 16 GB of RAM, expandable up to 32 GB. The data carrier is an M.2 SSD on the PCIe 3.0 bus. Such a disk will provide us with a very high speed of loading and saving any files, and the time of opening the operating system on this disk is reduced to just a few seconds. In addition, the laptop has space to assemble another two M.2 drives on the PCIe interface.

Asus ROG Strix G15 G513 is a fantastic piece of equipment. The combination of components mounted in it ensures very good performance in games and during demanding tasks such as advanced processing of photos, music or movies. The overall look of the laptop is very friendly and can appeal to most users, including those who prefer a classic and elegant style. The price also encourages you to buy such a machine.